You are at: Planned Giving > Gifts that Make a Difference > Donor Stories > Julio & Estela 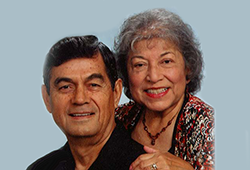 Soon after joining St. Lawrence Parish, the Gonzalez's joined the SCJ Family Associates formed by Fr. Jim Steffes, and they along with their four children were consecrated to the Sacred Heart. Julio and Estela said that their four children were influenced by the SCJs when they were teenagers. They believe that the Priests of the Sacred Heart helped to instil them with moral values.

It is through their faith that they were able to deal with and survive Julio's heart attack in 2003 and Estela's cancer (now long in remission). Their faith has sustained them through more than 50 years of marriage, 10 grandchildren and one great-grandchild.

If you, too, would like to support the work of the Priests of the Sacred Heart, there are many meaningful ways that can have a significant impact now and in years to come. We would be happy to discuss the options that might be right for you. Please contact Pam on our toll-free number 1-866-268-1057 or email her at pmilczarski@poshusa.org.